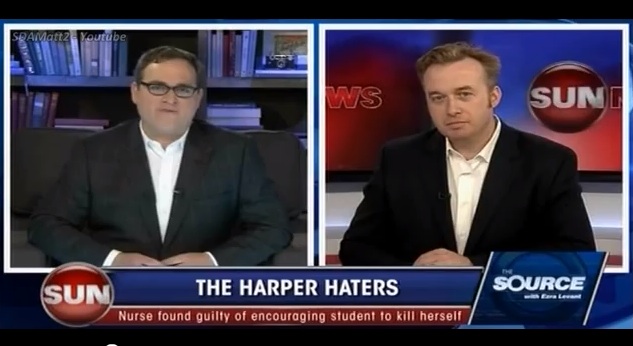 On the witness list are CBC president Hubert Lacroix and Quebecor boss Pierre-Karl Peladeau. But the Tories have taken the bizarre step of calling as witnesses Sun Media journalists who regularly write and comment on the CBC — Brian Lilley and Ezra Levant.

Sun Media is apparently relevant to this inquiry because it has filed hundreds of ATIP requests to the CBC. I’ll leave it to readers to decide on whether this is because Sun papers are crusading for accountability, or whether a de-funded CBC is congruent with Quebecor’s corporate interests, or both.

Both Lilley and Levant use their Sun platforms to denounce the “state broadcaster” as a waste of $1 billion of taxpayer’s money. Lilley has written numerous stories based on his company’s ATIP requests to the CBC. (Who can forget his revelations about Peter Mansbridge‘s desk chair?)

Sun Media contends, not without evidence, that the CBC is obstructing ATIP requests by using its journalism exemption to deny requests on a wide range of topics, such as the costs of an invitation-only CBC party for celebrities at the Toronto Film Festival.

Del Mastro contends that the CBC is wasting taxpayer’s money by fighting in court against Information Commissioner Suzanne Legault.

Legault went to Federal Court over CBC’s refusal to give her access to certain records so that she can determine whether they can be legally released under the Access to Information Act.  Similar issues of the Information Commissioner’s right to examine documents came up in the “agendas case,” which pitted then Info Comm John Reid against the Jean Chretien government.

In the CBC case, the Federal Court ruled in Legault’s favour, but the Mother Corp. has appealed the ruling.  Amazingly, Del Mastro wants the judge who made that ruling, Mr. Justice Richard Boivin, to testify before the ethics committee, too. He won’t, of course.

But I digress. The fascinating question is whether Sun Media will allow its journalists to testify before a parliamentary committee about their journalism. That would be, as far as I can tell, largely unprecedented.

When he was a Canwest executive, my current editor, Gerry Nott, testified before a parliamentary committee exploring media concentration, but he spoke only about our corporate practices and start-up of our national news service.  And On The Take author Stevie Cameron was called to testify about the Airbus Affair, but again, it was about her role as a confidential informant, not as a journalist.

If Lilley and Levant appear, they will be exposed to questions about their journalism by opposition MPs. It would be, I’d dare say, an interesting committee hearing.

Other witnesses called by Del Mastro:

UPDATE: will testify but Levant and Lilley will not.  I got a one-liner from Lavoie, via email: “No, our journalists will not appear.”