From the federal government contracting service, MERX, comes this tender offer to supply the Canada Revenue Agency with a selection of gifts to give employees for long-term service. These go to staff marking “milestones” between 15 and 40 years of pensionable time.

I found this highly depressing.

Further Loman-like details of the trinkets required for employee awards are in the PDF.

Tag clouds are a fun way to turn big chunks of text into a visual image. I’ve used them a few times on this blog, most recently with the last statements of executed prisoners, and we once created a cloud of the Governor General’s installation speech as art for A1 at the Citizen.

But, really, they’re more an amusement than anything else.

So I was stunned to see a tag cloud being used in a report prepared for the Privy Council Office — that’s Prime Minister Stephen Harper’s department — summarizing focus groups on the economy.

The report was prepared by Ipsos Reid.  The font choice makes me think the tag cloud was generated by Wordle.net.

Here’s what Ipsos says about its tag cloud, presented to the PM’s officials:

In order to better ascertain perceptions as they related to Canada’s economy, participants were given a list of words and asked to identify those which in their opinion best described our economy at the present time. The figure below provides a graphic representation of words most often used. 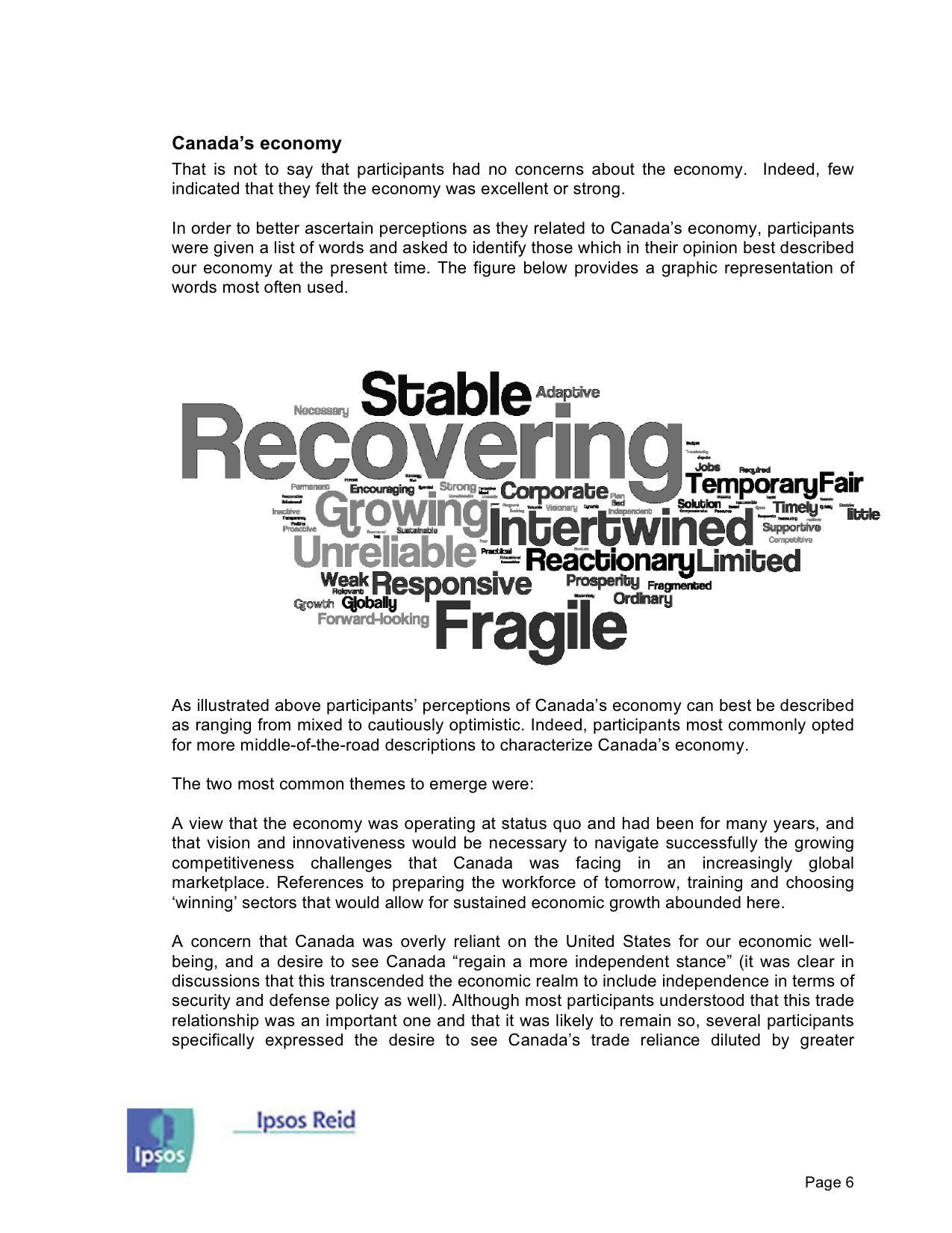 Not sure how I didn’t notice this earlier…. Screen grab of Sun TV campaigning for truth in Aug. 2011

Perhaps not surprising when one considers that both organs received consulting advice from one Patrick Muttart (although that ended in a hail of bullets).

A former senior Harper aide says he worked both sides of the journalism-politics fence this month, providing free corporate advice to Sun Media, while being paid as a political strategist to the Conservative election campaign….

Mr. Muttart had been giving pro bono feedback on music, graphics and on-air promotion to the Sun chain since last summer.

So, lots of action. But what was it about?

As a fan of government transparency, I’m grateful that the Federal Accountability Act required this level of reporting of meetings between lobbyists and public office holders. But it doesn’t mean much unless we are told the subject matter, beyond the vague description “Energy.”

For instance, I’d like to know why the citizenship and immigration minister, and the public works minister, were involved. Because they’re Alberta MPs?

I’d also be curious about why the natural resources minister wasn’t there.

I’m waiting for a call back from Encana, though in my experience, lobbyists never say why they meet with government officials.

UPDATE: In initial call, Encana flack noted that the dates correspond to the Calgary Stampede, so these meeting quite likely were hosted by Encana in Calgary. This would explain the presence of Conservative cabinet ministers with no apparent portfolio relevance to the energy industry.

(Disclosure: I own Encana stock in my RRSP portfolio.)

New Democrats reeling over the second cancer diagnosis for leader Jack Layton got more sad news when they learned the long-time partner of staffer Rob Sutherland had recently been diagnosed with advanced metastatic liver cancer.

Sutherland and Barry Simon are to be married tonight at the General campus of the Ottawa Hospital, where Simon is being treated.

Sutherland is a veteran Hill hand and procedural expert who has worked for MP Libby Davies and House Leader Tom Mulcair. He currently serves as chief of staff for NDP Whip Chris Charlton.

With Texas Governor Rick Perry entering the race for U.S. president, expect the executions conducted under his watch to come under renewed scrutiny.

These are kind of chilling.  Just out of curiosity, I threw them into a tag clog via Wordle (click for full size).

Another example, I hope, of how text can be data, too.

Anyone doubting the government’s commitment to shutting down the Canadian Wheat Board is instructed to take a look at this notice posted on the procurement site, MERX.

It announces the government intends to seek an auditor to check the books and “provide reasonable assurance of the total financial impact of the repeal of the Canadian Wheat Board Act and the dissolution or winding up of the CWB after the final pooling periods (expected to be July 31, 2012).”

The contract value is projected at $500,000 to $1 million and only pre-approved accountants are eligible to bid on the work.

After a contested plebiscite and the firing of the board’s president, Agriculture Minister Gerry Ritz announced in May the government’s intention to shutter the single-desk marketing agency by August of next year — a move that will require passing legislation in the House of Commons.

Another plebiscite on the board’s future, run by the Wheat Board, is under way now, with the results to be revealed Sept. 9.

But the notice of proposed procurement posted on MERX suggests the government is proceeding regardless of the results.

Allen Oberg, chairman of the Wheat Board, says the board has already done its own analysis of the costs of shutting down using accounting firm KPMG.

“The Wheat Board doesn’t cost the government of Canada anything,” he said.

“Now, the govt going to be stuck for costs of wind up, in the 100s of millions.”

The costs, he says, would be typical of closing any large corporation — penalties for cancelling contracts, employee severance, and payments for outstanding pension liabilities.

Although he doesn’t know the results of the plebiscite, he says he’s heard very strong support for the board from farmers he’s spoken to.

“The wind up costs might be more justified if it was farmers themselves who are asking for changes.”

Sun readers respond to non-white suspect, as only they can:

“Tanned Skin?  That ‘tan’ must be that cheap stuff in a bottle because he sure looks YELLOW to me. Call it what it is you politically correct numbskulls.”

“so nipper running around raping girls and you are worried about spelling ! did i spell this right AS#HOLE ”

“Deport this chink when he gets caught.”

“Jackie Chan? Isn’t that you? Why Jackie, why? You could’ve had any bitches you want!!!”

Now, policing a comments trench can be like playing a game of Whack-a-Mole. And it’s time consuming. Though most news organizations use filters to screen out clearly offensive language,  ugly stuff makes it onto the comments pages every day — even at my paper. Usually, however, an editor twigs to it in short order or is alerted by a reader and yanks it down.

But in this case — and the other involving the shooting at the Caribbean festival — clearly racist remarks have been allowed to stand on the Sun pages for hours or longer.  (As of this update, at 11:19 p.m, none of these remarks I spotted on the Sun site at 12:44 p.m. had been removed.)

And when someone makes these kind of remarks on a Citizen or Globe and Mail blog, they are quickly and emphatically denounced for their stupidity by others. There’s an encouraging trickle of this among Sun comments, but not much, and those that object are sometimes met with equally stupid taunts back.

More than a dozen MPs have failed to file their conflict-of-interest disclosures with federal Ethics Commissioner Mary Dawson.

Interim Liberal leader Bob Rae and prominent Liberal Justin Trudeau are among the list of 23 MPs, many of them rookies, who Dawson’s office says had not submitted the forms.

Finance Minister Jim Flaherty had also failed to submit on time, but his office emailed Thursday evening to say he sent it in.

“The minister’s disclosure has been signed now and delivered to the ethics commissioner today,” said his press secretary, Chisholm Pothier. ” The delay was an oversight, has been dealt with.”

The MP disclosures list all income sources, assets and liabilities held by MPs and their spouses that could put create potential conflicts-of-interest. They are reviewed by Dawson’s office and eventually published online.

Under the Conflict of Interest Code for Members of the House of Commons, MPs must file their reports within 60 days of the publication of a notice in the Canada Gazette announcing their election. For most, the deadline passed in July.

None of the MPs will be sanctioned, however, as the Code does not lay-out any discipline for non-compliance. This differs from the Conflict of Interest Act that governs cabinet ministers and senior government officials, who can be fined for failing to keep Dawson up-to-date on their personal holdings.

Several Conservative staffers and cabinet ministers have been hit with token administrative penalties to for failing to update their disclosures.

Neither Rae nor Trudeau responded to inquiries about their ethics disclosures, but after the list of tardy filers was published at afewtastefulsnaps.net online Thursday, several MPs on it came forward to say they’ve now sent the documents in.

New Brunswick Liberal MP Dominic LeBlanc says his name was entered on the list of deliquent MPs in error. “I had forwarded all of the updates and disclosures to the ethics commissioners office in June. They confirmed to me today they had received them,” he said.

A staff member in Alberta Conservative MP Rob Anders office emailed Thursday to say: “Mr. Anders disclosure statements have been sent to the Conflict of Interest Code for Members of the House of Commons.  We thought this was done in a timely fashion until recently when they informed us that they had not received it yet.”

Newfoundland Liberal MP Judy Foote‘s office explained: “She has completed her disclosure statement and it has been mailed. She had assumed her statement had been mailed until she received a call from the Ethic Commissioner’s office stating they did not have it on file. We can only assume it was lost during her recent office move.”

Newfoundland Liberal MP Gerry Byrne said  “events overtook me. I have indeed sent it off.”

Ottawa Citizen reporter covering government, politics and anything else that interests me. Specializing in data journalism and Twitter evangelism. This is just a place to dump Hill droppings and other found items that are too long for Twitter. Follow me there at @glen_mcgregor or email me at sushiboy21@gmail.com.

Error: Twitter did not respond. Please wait a few minutes and refresh this page.