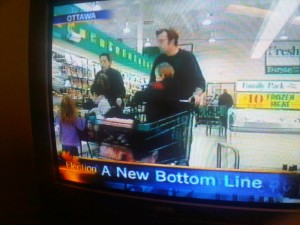 Like most journalists working on the Hill, I try to conduct my personal affairs in such a manner as to resist allegations of bias towards the politicians I cover.

I do not put up campaign signs during elections, I make no donations to political parties and keep my voting intentions to myself. I don’t even answer telephone polls on politics.

It’s not that I don’t have political views — my friends, family and some of my colleagues know them. It’s just that expressing them publicly will inevitably, to some, undermine the perceived credibility of my reporting. This is a standard practice among Hill reporters. Few of us want the headaches of dealing with charges that we’re in the tank for a party.

So, I was surprised to read in Sun TV commentator Brian Lilley’s blog this morning about NDP interim leader Nycole Turmel, in which he claims that “many” journalists working on the Hill have dabbled with communism in the past and some likely remain fellow travellers:

I know many journalists, commentators and politicians in Ottawa have a soft-spot for communists, many probably thought themselves communists in their youth, others likely still are communists, still, this is bizarre.

How Brian knows which journalists continue to subscribe to a discredited economic system, I cannot say, given the above disclaimer.

Long before Sun TV, Lilley was covering federal politics for radio stations CJAD and CFRB. (At the time, he worked out of the Parliamentary Press Gallery “Hot Room,” where I still work).

During the election campaign that year, the Conservatives were heavily pushing a plan that would scrap the Martin Liberals’ proposed national child care program and replace it with a $100 per month payment for every child under age six.

When CTV National News reported on reaction to the plan, who did they find to give it a enthusiastic endorsement?

The transcript in full:

LLOYD ROBERTSON: And in the election campaign with a deep freeze forecastover many parts of Canada, Conservative leader Stephen Harper unveiled a plan today sure to warm some wallets. He unveiled a new child care allowance. A money in your pocket pledge for those with young children. It’s aimed at seizing the agenda on child care from the Liberals. And while other leaders were quick to denounce the plan, for some young families on a budget reaction was quite different. CTV’s national affairs correspondent, Lisa LaFlamme reports.

LISA LAFLAMME (Reporter): Two carts and four kids under five. The Lilleys have been doing the math and like the sound of a new bottom line. Under the Conservative child care plan, the old baby bonus is coming back, $1,200 for every single child under six.

BARBARA LILLEY (Mother): Well, look, it will save us $400 a month so, yeah, that buys an awful lot of diapers.

LAFLAMME: Barbara Lilley is a stay at home mom. Competing with preschoolers at a play centre, Stephen Harper unveiled his two part plan. The new allowance, he says has no strings attached, available to everyone regardless of income.

STEPHEN HARPER (Conservative Leader): In fact the only people who should be making these choices are parents, not politicians, not the government.

LAFLAMME: Part two is all about daycare. $250 million in tax credits to help communities create more spaces. It’s daycare that illustrates the big difference between Liberals and Conservatives. Tories don’t agree with a government-run system. Liberals, of course, just negotiated daycare deals with the provinces, $5 billion over five years.

PAUL MARTIN (Canadian Prime Minister): Mr. Harper has said he does not believe, and I quote, in subsidized child care and early development. Well, I do.

LAFLAMME: The Martin deals would end in a year.

JACK LAYTON (NDP Leader): This is not a child care plan. It won’t create any child care spaces. It’s a tax plan and the leader should know the difference.

MONICA LYSACK (Child Care Advocacy Association of Canada): Having a little bit more money to be able to do that I don’t think necessarily will solve the problem for them. There still isn’t an adequate system that’s available for all children in Canada.

LAFLAMME: It will help Barbara’s brood, paying the price, she says for opting out of daycare.

LILLEY: For those of us who decide that we don’t want to do that, then it’s sort of sorry, bye-bye, we don’t really care about you. We don’t count.

Although he is not quoted in the clip, Lilley is seen in  four shots.

Now, I don’t know for certain if Brian felt the same way as Barbara about the Tory child care plan. I certainly don’t share my wife’s views on every issue. But if she planned to put our kids in a national news TV report endorsing a plank in a party’s platform during an election campaign — on behalf of our family — I might strongly suggest she reconsider.

Otherwise, people might start speculating about our political beliefs.

SIDE NOTE:  I Lilley explains it was a friend at CTV who asked his family to appear, but not Sims. So, she wasn’t involved.